I have been coveting the Treo 600 since last year when it was demoed in July 2003 and they said at the time, it would be released in Fall. However, Canadians had to wait until just recently to be able to purchase a Treo 600 through Rogers or Fido. Here is a great page for watching movies of day-to-day use of a Treo. 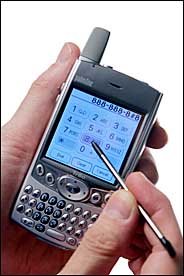 Jeff Hawkins is the king of market research. He wandered around for months putting little cardboard cut-outs in people’s shirt pockets until he figured out the exact best size of a PDA…and then built the Palm Pilot which was of course a stunning success and which finally launched the pen-computing era. Then Palm sold to US Robotics which was  bought out by 3Com, and then Hawkins and Dubinsky left the company and founded Handspring where they continued to innovate while Palm died a slow death. In a bizarre reversal, Handspring was recently bought by Palm and so Hawkins is home again…sort of.

Hawkins has seen the future….and it is not a PDA-shaped future. It is the future of communicators. Yes, just like Star Trek. He bet his company at the time, Handspring, that people were going to only want to carry one device for their phone, their email, and their calendar/contacts. So he called his new device the Treo (three). There is actually a camera in there too, so maybe it should be called the Quattro?

The first couple of devices were kind of bulky and weird but the third release (right on cue with my rule of thirds) is the Treo 600 which for the most part has nailed it. It’s small and phone-like, it does calendar and contacts, it does email and SMS, it has adequate web-browsing, a passable 640×480 camera, and every reviewer who gets their hands on one raves about it.

The only missing functionality is apparently Bluetooth and that is rumoured to be coming in the Treo 610 which should be just around the corner.

In honour of Jeff Hawkins, I offer the following:

• If you’re building something for people, don’t THINK about it. Test it, test it, test it. Everywhere. With everybody. Build little prototypes. Get them involved.
• Follow your own path. Ignore the critics. Look forward into the future 5 years, figure out what YOU think people will want…and then DO it.
• If you want to make a lot of money, sell your company. Heck, if you can manage it, sell your company multiple times. Just keep reselling it over and over again. That will allows you to make even more money so that you can keep having fun and ignoring your critics.
• Find out the major design constraints (must be small, light, under $200) and then build it from there.  Don’t let the engineers dictate, only the visionary who is checking with the users. (Newton was “must read hand-writing, must be 8×5 and ??? – they were the WRONG criteria.)
• Find a good team. Hawkins the visionary had Dubinsky the marketer. And he has had a few great people like that who have followed him everywhere.
• Assign somebody to financing FULL-TIME. (Hawkin’s companies have been perpetually under-funded, inhibiting them from expanding as fast as they could.) This was a lesson derived from what he has done wrong.

That’s it for now. And if anybody has a Treo 600 that needs to be reviewed, you know where to reach me.

I went through my photos to try to find my best sunrises and sunsets. I'm definitely my father's son. Early morning training with the crew at Ocean BeachMorning over BostonBat-dogA GoRuck event in TahoePhoto-bomb!Yet another early morning training sessionRunning breeds cowardice (why do we keep doing it?)

I think this will be the successor to the original Land Rover Defender. In fact, the CEO of the company behind it tried to buy the Defender name from Land Rover but they of course had other plans for it. So he built Ineos (the company) so that he could